When a billionaire entrepreneur impulsively decides to make an unforgettable film, only the best will do. Eccentric filmmaker Lola Cuevas (Penélope Cruz) is recruited to direct this ambitious endeavour. The all-star team is completed by two acting legends with enormous talent but even bigger egos: Hollywood heartthrob Félix Rivero (Antonio Banderas) and the enfant terrible of the theatre world Iván Torres (Oscar Martínez), who could not be more opposite. Both are legends - and not well-disposed towards each other. In order not to jeopardise the filming, Lola puts them both through increasingly eccentric tests. Félix and Iván not only have to face the pitfalls of their vanity, but also their own legacy. 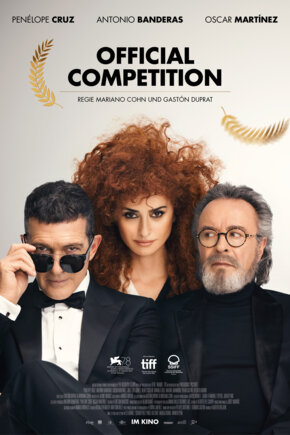 See the reviews
Book tickets
Official Competition (competencia oficial)
Thursday, 11. August 2022
21:17
Tickets
CHF
Shopping cart
We use cookies in order to make our website as easy to navigate as possible. Further information can be found at here.